Caorle, considered the pearl between land and sea, is one of the most beautiful and fascinating tourist destination, across the Adriatic Riviera.
It has 2000 years of history, which are witnessed by the writings of Trino Bottani (a Venetian historian born in 1811), which write that the Roman fleet was staying here before the year 238 BC, as confirmed by the numerous findings dating back to the Romans,found in its territory and under the sea. Caorle begins its history in the heart of a fishing port, around which the historic old town has taken shape over time and has now become a completely transformed pedestrian zone. The typically built houses are placed between narrow streets called "calli" and squares, they are colourful and painted with pastel colours, recalling the island of Burano. The magical atmosphere that is experienced while walking in the historic centre is also due to the inheritance of the Serenissima Repubblica Veneziana (Most Serene Republic of Venice).
There are many monuments and places of considerable historical interest, such as the Church of the Madonna dell'Angelo, which stands on a strip of sand onshore. The devotion to the Madonna dell'Angelo has its roots in the ancient history of Caorle: the tradition indeed reveals that the statue of the Virgin came from the sea, and, in 1727, because of a marine inundation, many people had to refuge in the sanctuary seeking protection and though outside the water level reached two meters height, inside a single drop of water didn't enter.
Caorle and its territory are characterized by a lot of small and big legends and beliefs, which can be seen on the friendly spirit of the locals and on the characteristic philosophy of life that differs sea-faring people. This adorable Venetian town gives the lovers of the sea nearly 20 kilometres of beach, divided into two beaches. The beach of Levante and the beach of Ponente. To the north the Laguna of Caorle is the ideal landscape for going out by boat and feeling immersed in unspoilt nature, that enchanted nature which Ernest Hemingway liked so much and described in his book "Across the River and Into the Trees". 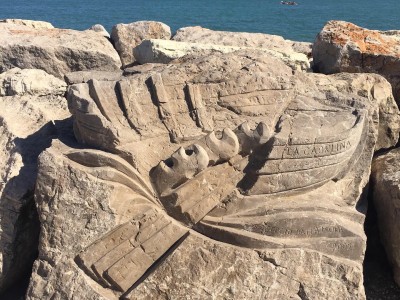